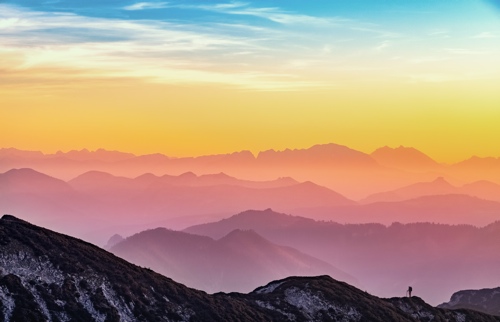 Happy New Year, writers! What’s up your writerly sleeve for 2018?

I’m posting this, by the way, a few days after January 1 as a reminder that you can set writing goals any time (remember that). After all, goal setting doesn’t have to be a big, shiny new year thing. Besides, January 1 and all the holiday hoopla and folderol that leads up to it isn’t always the most sober, thoughtful time of year. At least for a lot of people.

But goal setting aka making resolutions at the start of a new year is a thing, and maybe even a bigger thing in 2018 after 2017’s rollercoaster ride.

Here’s a peek up my own sleeve. But first, let me tell you how I arrived at one of my goals.

I had a bit of an epiphany.

An epiphany! I love that word. It’s a sudden realization after muddling over a problem. Or maybe you don’t muddle or even think about any particular problem, but a great, big, enlightened moment falls from the sky regardless.

Here’s the problem I wrestled with. Last week, I spent hours and hours writing a post on how to set writing goals for the new year. You know, review 2017 and evaluate your accomplishments, your challenges, and your failures. Then, brainstorm on 2018 and what you could improve as well as what you plan to do. Set up a spreadsheet, make a list, download this or that app.

I’ve written that kind of post at least five times. And I’ve read countless more, like this one and this one. In fact, I have eight or ten posts filed away that I haven’t posted, just like that one. Why the hell not?

Because they’re boring. They don’t inspire me. They won’t inspire you. Oh sure, maybe you’ll get some much needed information or insight—if you’re the type who doesn’t mind reading dry, boring articles.

And there’s so much written on exactly the same stuff. Why should I write yet another one when you can hit Google and get twenty articles on the same topic with the same information?

True, I have a bit of a talent for explaining things thoroughly in an easy-to-understand format. Lots of readers and students have told me that. And if you’re a subscriber, I’ll save you the hassle of looking up reputable information in the middle of a time crunch.

But some of my posts take hours and hours to write and edit. And then I have little time left for anything else.

Every post I’ve written lately (but haven’t published) is, as far as I’m concerned, a flatliner. Dead. Devoid of personality. Formal. Academic sounding. And no matter how much I edit and revise, I could barely read any of them. I wasn’t even sure they made sense. The organization is fine and the length is fine. They’re properly edited and proofread. But something was missing. And I couldn’t figure it out, but I kept trying and trying. And I finally gave up.

Then the bright light descended from the heavens while reading an article by one of my go-to food gurus who’s also a fabulous writer. Warning: F-bombs abound and probably NSFW. She’s hilarious and, at the same time, super serious with well-researched information. Kind of like me, which you wouldn’t know from those recent blog posts. Bingo! That’s it!

What’s missing in those unpublished posts is me. My tone, my slang, my style. My sense of humor and enthusiasm. Anything even remotely cheerful or inspiring had disappeared. It’s a dead, just-the-facts-only academic voice that I carefully honed in college but which has no place here.

Seems like all the fiction and creative writing I’ve been doing in the last few years gives me so much freedom, and as I settled into a blog post, I felt restricted. And I slipped into dry and boring because it felt dry and boring. But it doesn’t have to be that way. Sure, it’s a serious topic, folks. Grammar! Writing! But those posts are way-y-y too serious. I wasn’t having fun, and it’s obvious.

I wondered whether I was depressed or something because that’s what my writing looked like: a big, flat, dead-ass bunch of words thrown together by someone whose heart isn’t into it. But that’s not it; I just wasn’t inspired and didn’t know why.

But I’m changing that. Starting now. Now I’m just going to talk to you, dear reader, instead of trying to craft perfect posts for some imaginary professor. As I would a friend or a neighbor. After all, we’re all writers, aren’t we? We’re part of the same tribe, no matter our differences or what we aspire to write.

Have you considered your writer’s voice? Check out this article I wrote. THAT is my blogging voice. And somehow it went missing.

Here are a few more realizations from the past year.

I’ve heard too many aspiring writers say “I don’t have time.” They mention their kids, their jobs, and any number of other things. And I still see them on Twitter or Facebook, goofing off. What gives?

You want to write? Then write. Sure, some of us are stretched thin and all stressed out. I get that. But how important is writing to you? If you think you’re busy now, what if that changes? Emergencies happen, kids get sick, you get sick, you lose your job, the car gets smashed … life happens. You will always have an excuse to not write. I’m guilty of that myself.

Thing is, you have to make time to practice writing. You can’t just suddenly say, “Yay! I’m ready! Now I’ll sit down and write that novel.” Yeah, right. Good luck with that. Most best-selling authors write the breakthrough novel after three or four lackluster attempts and loads of essays, workshops, and determination. Not everyone is so lucky as J.K. Rowling or Stephenie Meyer. Even Stephen King paid his dues by writing short stories before Carrie was a hit.

Tidy up your life and make space for writing.

What can you give up, change, or delegate to make time for your writing goals?

Harsh? Maybe. But you can’t have it all if you want to write, and it was a lesson I learned the hard way.

Here are a few things I’m doing to cut down on stress and make more writing time:

A common goal is to write a certain number of words, maybe 500 or 1000, each day. It’s a great goal! But what stops you from doing it?

Remember, habits take time to form—some say about 21 days before the activity starts becoming habitual. And you might start and stop a few times. But what gets in the way? See if you can cut it out of your life.

Novels aren’t written in a day. Earning top dollar as a freelancer or becoming a popular blogger takes time. What steps do you need to take?

One of my goals is to submit a smashingly good essay to the New York Times “Modern Love” column. It’s hugely competitive, and it won’t be easy. What steps am I taking to make it happen by the closing of 2018?

I’m practicing personal essays on topics I care about. Oh, here’s one now. It doesn’t matter whether I get paid for the writing practice or not or whether an essay is super popular or not (or whether anyone reads it). The goal is to practice (like training for a marathon), and it will include writing several essays with potential topics for the column.

Writing regularly is a goal any writer should have.

Don’t know what to write? Solution: If you don’t have a project going, you can write from prompts (google “writing prompts”). Or from something you saw during the day. Or how your kids interacted. A neighbor’s strange behavior. Characterizations of people in a coffee shop or little blips and blurbs as ideas come to you. Just write. Get out a few rough sentences and it will come. Practice, practice.

But what about measurable goals for 2018?

Here are some of mine.

That’s a lot, and it doesn’t include my usual income-producing work. But time flies. If you’ve read Colors, can you imagine where the inspiration came from? Hell, yeah I need a personal chef.

What are your goals?

If you’re all set for 2018, rock on! But if you’re not, it’s never too late to set goals. You can set goals any time. The calendar’s months and years are just a handy way to measure time, after all. You can work with moon phases, if you want to: “Within twelve full moons, I will …”

No matter what your writing dreams are, now is the time to set goals. Not tomorrow, not next year. Now. Turn dreams into goals. Even if it’s practice, it all counts. Just do it.

And don’t forget to make time for epiphanies.

What are your goals for 2018? Having trouble? Share in the comments.

Photo by Simon Matzinger on Unsplash

Previous Post: Traditional, Self, Indie, and Vanity Publishing—What’s the Difference?

Next Post: Kill Your Adjectives — Well, Most of Them