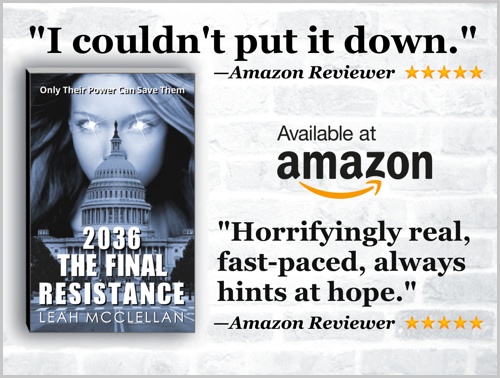 America has become a fascist state, and there’s only one way to save it.

After fifteen years of global isolationism, widespread bombings, and the leadership of a fanatical dictator, life has changed. Protests are memories, lies are truth, the free press is gone, and tolerance is exchanged for torture. A silent desperation falls over Washington, DC and the entire United States.

Kathryn Foster had marched the marches and waved the signs, and she’d once fantasized about using her Power to stop the seeds of fascism before they took root. But she’s horrified with her violent thoughts and hopes for the best instead. When she’s gang raped a few years later, herPower fails. Pregnant, her options are illegal and risky, and she decides to carry the child rather than let the rape destroy her. With her Iranian-American friend Maheen’s help, she fights her revulsion and lovingly raises her daughter, Regina.

As conditions worsen, her buried rage emerges as she longs to do something, anything to stop the destruction of democracy. And twelve years later, the Resistance reorganizes into an army of Power. Kathryn’s Power. Regina’s Power. Maheen’s Power. And the organizer is not only a well-known politician, he’s one of the rapists and Regina’s father. He tries to make amends, but Kathryn can barely look at him. It’s America’s last chance for freedom. Can she trust him and dare to … hope?

Read an excerpt from Chapter Four: Rage begins to Seeth  or Chapter Twelve: The Resistance. (Click to download PDF)

Available in print and ebook formats.