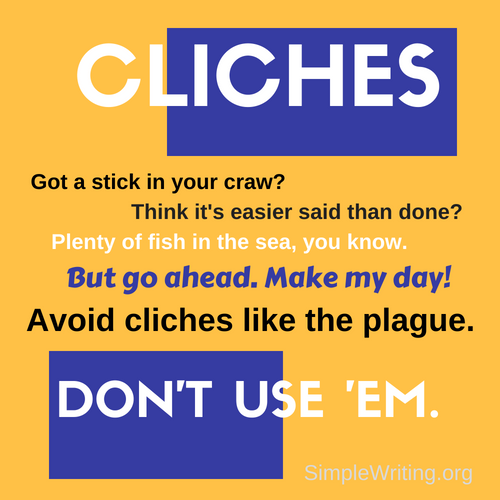 Wy avoid clichés? Everyone uses them, and they capture your thoughts and ideas in the blink of an eye.

But consider this: if you’re a blogger, freelance writer, or author, your writing will be read by readers of English around the world.

Since I’m an American, the clichés I use are, naturally, American. And if you speak (and write) British or Australian English (or Canadian, New Zealand, Ireland, South African, or Indian) your clichés will be different.

Clichés vary even by state, province, or region, and you have to ask yourself, “Can everyone reading my writing understand my expressions that don’t make literal sense?” Since you don’t know—and you can bet that plenty won’t—it’s a good reason to avoid clichés.

You know what snakes in the grass are, right?

They’re snakes, of course, in green vegetation that grows in your yard (or garden) called grass. That’s the literal meaning. Figuratively, it means a trickster or devious, malicious person who pretends to be your friend but really isn’t. Kind of like a snake hidden in the grass.

But guess what? I didn’t know that. I saw it in a list of clichés, I was curious, and I looked it up. And as I’ve learned, if I don’t understand something, I’m not the only one.

Worse, clichés are tired, overused expressions that bring to mind the same old thing, and that’s the main reason to avoid them. Write fresh. Write original. Create your own images in people’s minds as they read.

That’s what writing is, after all. Transmitting your original thoughts into someone else’s mind via the written word. Why give readers the same expressions—and images—used by millions of others countless times? Sounds kind of icky, don’t you think?

Here are a few clichés I see all the time. Just skip ’em, okay? Do yourself and your readers a favor and avoid clichés.

Food that’s rich, delicious and made with love from fresh ingredients. Just like grandma used to make.

I have no idea what grandma used to make; both of my grandmas passed away before I was born. And most of the grandmas I know aren’t kindly old women with grey hair and an apron cooking heavenly food for family and friends. They’re 45, 50, 60 with careers and more familiar with take-out than cookbooks.

Besides, with so many people eschewing meat and choosing plant-based diets, who wants to eat grandma’s pork roast? Or whatever grandma used to make.

2. And that’s just the tip of the iceberg.

Look everywhere, examine everything, or complete every facet of the task. It’s easily understood, but why not do a job that’s thorough, exhaustive, comprehensive, systematic, meticulous, in-depth, detailed, or scrupulous? Your directive or description with be more exact, and you’ll sound smarter, too.

Work hard until late at night or all night. The “oil” refers to the oil used for lamps in the days before electricity. It’s overused as much as “pull an all nighter” is, and it goes back to at least 1635. Time to give it a rest, no? Try “he worked until shafts of sunlight glittered behind the shades” or “until the words blurred and he could stay awake no longer.”

Set aside differences to get along with someone. I don’t know about you, but this one sounds pretty gruesome. Try “they worked out their misunderstandings” or “came to an agreement” or anything that’s a little more specific and doesn’t sound like a couple of psychos swinging sharp metal blades around.

6. It was the calm before the storm.

Peaceful time before frenetic activity. Sometimes the air does seems eerily torpid before a summer thunderstorm. But meanwhile, electricity shimmers, clouds build up rapidly, and birds and other animals take shelter because they know what’s coming. It’s a deceptive calm. If you’re writing about an actual storm, why not do some research and be factual? In any case, skip the worn out cliché and offer a more imaginative description. “Their tense, fidgety silence was a harbinger of the argument to come.”

A view from above. With the advent of airplanes, helicopters, satellites, drones, and Google Earth, birds aren’t the only one getting an aerial view. Just write what you mean and avoid clichés. “From the mountaintop she could see the hazy curve of the earth.” Why get birds involved unless they’re chirping in the trees?

Don’t get upset about something lost that can’t be retrieved. Cliché or not, it’s sometimes a good point. Except when someone needs to cry about something, like maybe a death in the family. Or maybe that was the last of the milk, dad’s unemployed, and his kid is howling for milk for his cereal . . . you get the picture. Just skip it unless you’re characterizing someone in a novel by his overuse of silly expressions.

In the current era or time period, often used with an air of superiority along with impatience or irritation with how things are now compared to “the good old’ days.” Just stop. Don’t use anything that sounds like this. Please. Just stop. This is the most overused cliché of them all.

To stay away from something as you would avoid a disease that could kill you. Fortunately, the bubonic plague, which was probably the Black Death of the Middle Ages, is now rare and easily treatable. So hardly anyone has to take steps to avoid it. You could replace “plague” with something else, of course, and start a new cliché. You could substitute anthrax, but while “avoid it like anthrax” does sound catchy, anthrax isn’t something many of us worry about.

Sometimes clichés can work, so don’t be too worried about them. But most of the time, be  specific. Sound smarter. Avoid clichés and use original expressions for more interesting, accurate writing.

Stock British Phrases (I can’t judge which of these are considered clichés, but many probably are).