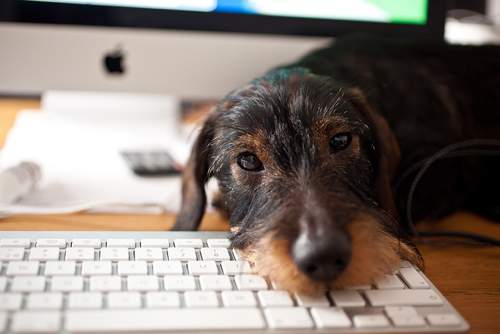 If you’ve ever had a dog who’s your BFF, you probably nod your head when dog lovers talk about the lessons dogs teach.

Oh, they don’t teach specific lessons directly. Not intentionally, as far as anyone knows. But if you listen up—if you can learn from someone whose idea of fun is peeing on fenceposts—you’ll write more, write better, and reach your writing goals faster.

Write like a dog would write. Follow these tips for writers and do it doggy style. (And get your mind out of the gutter.)

1. Dogs accept things as they are.

If they want to dig for moles, play catch, or run around a dog park, dogs don’t hesitate.

They don’t whine I’m no good at catching balls. Digging is too hard. Those other dogs are faster. I’ll look like a jerk, and they’ll make fun of me. My human will think I’m an idiot.

Dogs just do it. They want it, and they don’t hesitate.

What about you? Do you let negative self-talk, voices from the past, and imaginary outcomes stop you from digging for moles—following your writing dreams?

What holds you back from writing doesn’t exist. The only thing that exists is this moment.

Dogs don’t worry about their looks or what other dogs think of them.

Ever take a dog to a dog park? Weee! Dogs love dog parks.

Rules get worked out—who’s the boss, who doesn’t like rough play, who won’t tolerate ball stealing—but they don’t worry what other dogs think of them.

They don’t get embarrassed when Big Alpha growls and snaps, Back off, Buster.

They don’t care that they’re covered with mud.

They don’t care about falling when another dog charges them.

Dogs just get back up and do their thing. When they’re tired or have had enough, they take a break. No shame, no problem.

Do you worry what people think of you and your writing? Does rejection get you down? Do it like a dog: Get up, shake off the dust, and get back to writing.

Ever watch a dog dig for a mole or some other critter they know is down there somewhere?

They don’t stop until they’re exhausted or they’ve caught their prey.

And a smart dog switches tactics if needed. No mole? Pick another spot. It’s down there somewhere.

Your mole is there, too. Do you give up easily?

Don’t think writing or blogging is easy—it isn’t. You’ll get dirt under your nails. Bloody paws. A few scratches and sore muscles.

You’ll get exhausted, and you’ll get confused. Where did that damned thing go?

The real question is this: how bad do you want it? Are you wiling to make your writing dream a reality? Will you dig a hole to the other side of the earth to make it happen? A dog will. Would you?

Most dogs can be trained to do almost anything. But if they have a job to do, forget it.

And if a digging dog hates water, you’re out of luck. The dog’s focused on those moles, after all, and water just isn’t her thing.

Try getting her in the pool for a swim. And good luck.

She’s focused. On task. Driven for success. And she’s not going to give up on that mole.

Sure, a well-trained dog will come when called. But you won’t get that dog in the water. Not only does she hate it, she wants to get back to her mole.

And isn’t that how you should be about your writing? You’re well-trained, so you take care of other responsibilities. But you get back to digging your mole as soon as you can.

Maybe a dog loves digging for moles, but his family moves. No moles in the new yard, and he looks for something to do.

But wait! What’s that? It’s not a mole, but I can chase a possum. Woo-hoo! Huge thing, good grief. And what’s that? Woo! An armadillo! Freaky, but why not?

Maybe your novel isn’t working for you—right now—but that doesn’t mean you should stop writing. What about short stories or poetry? How about starting a blog if you don’t have one?

Or maybe you’ve lost your enthusiasm for your blog topic, and you’re not able to get it back. You’re just not into it, and that’s that.

Do you quit writing? Heck no. Find yourself a possum or an armadillo.

Dogs are reasonable and trainable. And they want the approval of their humans just as much as they want that mole. Or armadillo, as the case may be.

So if a dog’s human corrects his behavior, most dogs willingly comply. Maybe the dog can’t see the logic, but most dogs seem to say, OK. Fair enough. That’s a reasonable request. I’ll do it your way. A treat or praise helps, of course.

Good writers listen to reason, too. And they take advice or “corrections.”

Find a mentor or a coach. Take a course. Read articles on writing, like you’re doing right now. Ask writing friends for feedback. Emulate good writing when you see it.

And correct your behavior—your writing, of course. You’ll get plenty of praise and treats. 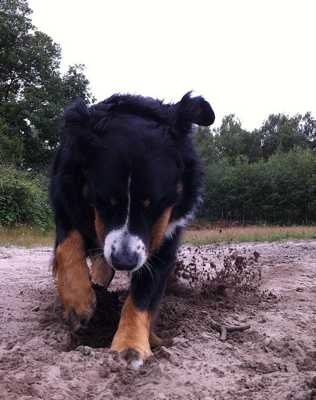 I don’t know about you, but I don’t let my dog lick my face. Call me uptight, but after 15 years of watching him sniff and lick everything from dead birds and dried up duck eggs to freshly killed rats and (yep) moles, it’s kinda gross.

The daily walks with the sniffing and licking at other dogs’ urine and poop is bad enough.

But as a writer, I stick my nose in everything that’s readable. And you should too.

Explore. Read stuff you haven’t read before, stinky stuff. Types of writing and styles or genres that you don’t normally like. Roll around in it like dogs roll on dead critters.

Get your nose good and dirty.

Spend time in a bookstore or online, and browse through books and magazines you normally never look at.

Sniff and lick everything you find. (Read different styles of writing and unfamiliar topics, that is.) What can you learn? What can you apply to your writing?

I don’t read minds, so I can’t say for sure that dogs don’t feel sorry for themselves sometimes.

I’ve had three dogs over the last 20 years or so, and a few as a kid, too. I nursed a dog with cancer for 18 months until his passing. Happy boy took it all in stride.

Another dog had a congenital heart problem and flat-lined suddenly, but she came back with emergency CPR.

She didn’t complain. She had a full, happy life with medication for another month, and that was it. Did she feel sorry for herself? Did she think Oh why me? Why did I get the bad genes and this heart problem? I don’t think so. She had moles to dig until the end.

Another dog (still with me) has a different type of heart disease, but his medication keeps him going. Self-pity? Nah. Not Jack. He just wants to dig for moles, but he tires quickly. He seems to say, Oh well. I’ve dug moles for 15 years, and I’m happy to watch the other dogs now. How about a treat?

Whatever your situation is—if it’s less than ideal—self-pity doesn’t help.

You have moles to dig. And epic shit to write. Get to it. When you catch your mole, go for another one and another. Until you can’t dig any more.

With few exceptions, dogs are loyal to their humans no matter what.

Even if their humans can’t afford to take them to the vet or give them the best food or fancy toys, they don’t care. And no matter how rough the going gets, they remain loyal.

And they’re “loyal” to what they were born to do. If they’re diggers, they dig. If they’re a herding breed, they herd. If they’re workers, they pull sleds. If they’re naturally protective, they’re guards.

Are you loyal to your task and your calling? Do you stick with your writing no matter how tough the going gets? If you aren’t and if you don’t, take a lesson from our canine friends.

You’re a writer. Be loyal to your writing. And remember “doggy style” when you feel like slacking off. 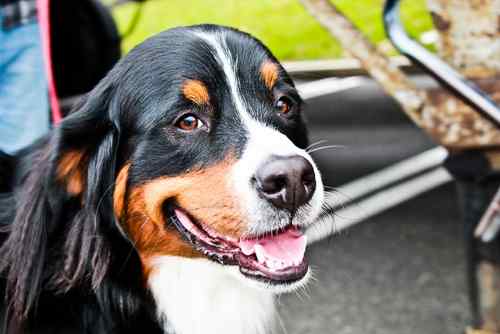 Dogs know how to do one thing, and one thing only: how to be a dog. And part of being a dog means doing what they know instinctively.

They don’t try on other possibilities as we humans do. They don’t go from one type of job to another to see what makes them happy.

And isn’t that what you, as a writer, should do? Have you instinctively known you’re a writer? Are you pulled toward writing like a magnet?

Write. Keep on writing. You’re not supposed to do anything else, so don’t try anything else. Just be who you’re meant to be.

Next time you’re doubting your calling, your abilities, your skills, or your chances of success, just remember: 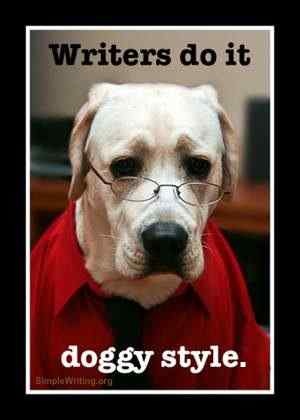 Have a dog? Learned any lessons? Share in the comments!

Previous Post: An unusual way to improve your writing