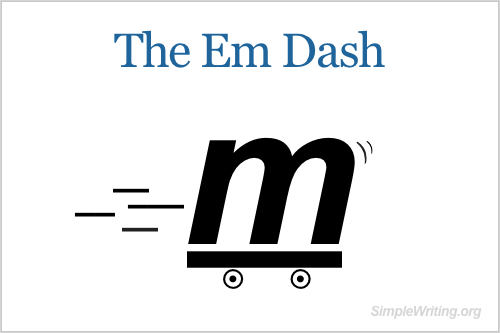 Do you use em dashes? Do you know what an em dash is? If you do, you’re in good company. Lots of writers use em dashes—a lot. I definitely do—sometimes more than I should.

And since too many em dashes detract from effectiveness—plus look sloppy and unprofessional—if I have more than one on a page (about every 250 words or so), I decide which are truly useful—and which can be ditched.

Stop! Take a look at the opening paragraphs again. Now there’s a case of em dash overload. And the parentheses don’t help matters either. Do you see what I mean?

All em dashes can be ditched, to tell you the truth. They just aren’t necessary in a piece of polished writing. They’re an embellishment, a tool, a piece of garland on the tree.

But used skillfully, they add emphasis, meaning, rhythm, and voice the way no other punctuation mark can.

Let’s get clear on what an em dash is.

An em dash is a straight, horizontal line positioned about halfway between the bottom and top of a lower-case letter. It looks like this:  —

It’s called an em dash because its width is about the same as a lower-case letter em (m).

The main reason to use an em dash is to set off an explanation or an abrupt change in thought.

What an em dash is not

An em dash is not an en dash. An en dash is a dash that’s about half the length of an em dash. It’s approximately the width of the lower case letter en (n not m). Here’s an en dash: –

An em dash isn’t a hyphen, either. Or even two hyphens. A hyphen is a teensy weensy little dash that’s typically used to join words.

A hyphen connects words that are closely related as a single concept and words that function as compound adjectives (or joint modifiers). A hyphen is also used to connect a prefix with a word.

Prefix: re-covering (a sofa, for example, not recovering from an illness), pre-kindergarten, ex-wife, co-owner

Hyphens are used for other purposes as well; this isn’t intended as a full discussion. Here’s a good list of hyphenated words, but always check with your preferred dictionary. I use Merriam-Webster.

An en dash is used to connect items related by distance. It’s not often used by the average blog writer, but you’ll see it in The New York Times and other professional publications or books with editors who are careful with standard usage.

Magazine issues or regular events and occurrences: June–December (includes each month’s issue or an event starting with June and ending with December)

The en dash has other uses; check your preferred style guide such as The Chicago Manual of Style  or the AP Stylebook.

Here’s what the em dash is all about.

The em dash can set off a sudden thought shift. It’s often an explanation that replaces parentheses, especially when you want to emphasize abruptness. It can also replace commas, a colon, or a semi-colon.

She bravely led the way—though her voice trembled and her hands shook—and we finally arrived safely.

He controlled his anger—barely—and gave her the money.

It can also set off an introductory clause or word when it’s followed by a pronoun that introduces a main clause.

Flattery—that was the main technique he used to get information from a witness.

Lying, cheating, and running around—these were not typical behaviors.

Barraged with insults, held at gunpoint, threatened with a knife—nothing could stop her.

An em dash is also useful in dialogue to show a break in thought that’s abrupt (rather than a trailing thought that gets an ellipsis).

“She told me you—” Patrice gasped when Angelina entered the room.

“Yes, she did—of course she did—but you know better than to believe her,” Angelina said as her heels clicked on the wood floor.

Paired with dialogue, it interjects action or other details.

“This isn’t the first time Brian has broken a promise”—she rolled her eyes—”and I’m sure it won’t be the last.”

The 2-em dash can replace a missing word such as an expletive that may be offensive in writing that otherwise contains no such language.

“What the —— are you talking about?” his father roared.

The 2-em dash also replaces a name when it’s unknown or intentionally disguised in works of fiction. This is most common in historical fiction imitating writing from the 1700 and 1800s.

Lady —— and her servant fueled the already heated gossip among the townspeople.

Veronica A—— decided to attend the ball at the last minute.

Use an em dash with an exclamation point or question mark, but not with a comma, a colon, or a semi-colon (and only rarely with a period).

If only I could have saved him—if only!—he’d still be alive.

These are the most common ways to use an em dash; however, academic writing requires em dashes for other situations.

What about spaces before and after?

Whether or not you surround an em dash with spaces or not depends on which style guide you follow. AP Stylebook calls for spaces. The Chicago Manual of Style (CMOS) does not.

Or it can simply be a matter of personal taste. Here’s a comparison.

I prefer no spaces, and not just because I follow CMOS. I think the spaces create too much of a gap and make the eyes work too hard to get from one word to the next. As a result, the writing itself distracts readers from the message by drawing attention to the style.

Plus, with spaces around the em dash, text may automatically break at the end of a sentence (as in a blog post), and the next line will start with an em dash. That can be confusing. Consistency, however, is the most important factor.

How to create an em dash

The main reason for incorrectly using a hyphen or double hyphen is that many writers just don’t know how to create an em dash since it’s not on keyboards. Here’s how you do it.

Autoformat: type a word, then two hyphens together, then another word. When you click the space bar, the hyphens become an em dash.

If none of these work for you, just google “keyboard shortcut for em dash Windows (or Word, Word 2016, Windows 365, Mac, Mac Pages, iOS, and so on). If you know of another way, please share in the comments!

Use an em dash, but use it wisely

Em dashes are great. They provide variety to your sentence structure plus add style to your writing. But above all, be careful to use them thoughtfully. They don’t add much—if you use them carelessly—as I’m doing in this sentence. However, they can add a punch or stress a point when used in just the right spot.

And remember—don’t substitute a hyphen or two hyphens. Be professional. Use the correct punctuation mark and, if you can’t create an em dash for some reason (or aren’t sure how to use it), just skip it. You’re better off.

Do you know how to create an em dash in a different way or on a different OS? Please share! Questions and comments are always welcome.

Previous Post: How to Write Sex Scenes from Sweet to Steamy Hot