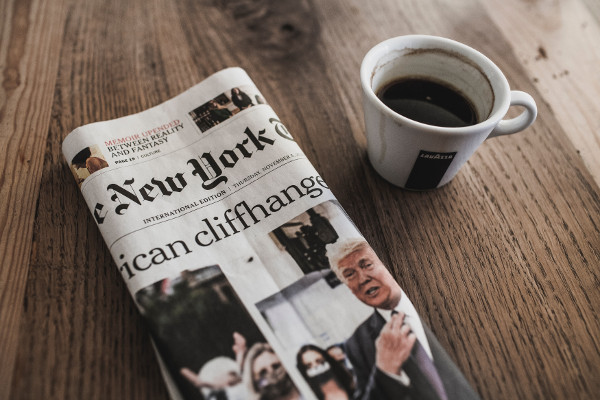 Keeping up with the news keeps you informed. But you can also use it to improve your self-editing skills by intentionally looking for mistakes or confusing writing.

I know, I know. You’re tired of the news. You don’t have time or it’s too distracting or upsetting. Or you watch it on TV.

But reading the news online from multiple sources is a quick way to improve your writing overall. And it’s well worth the time spent.

I’m using online or print journalism as an example of how reading helps writers develop their skills, but you can practice self-editing with almost any type of writing.

That said, news media are prone to errors more so than, say, a novel or memoir that’s spent a year or more in the hands of editors. Plus, any kind of news—especially so-called “breaking news”—is often written quickly. Opinion columns, not so much. It’s the front page stories and updates that lend themselves to mistakes.

As you read, ask yourself

• Is the article clearly written and understandable?
• Is it free of typos, grammar errors, or punctuation mistakes?
• Is the language strictly factual or does it include emotionally charged language such as that found in tabloids or gossip rags?
• Is the article slanted toward a particular bias, belief, or opinion?
• Is the information verifiable?
• What reading level is it? Hint: The New York Times and The Wall Street Journal have higher reading levels than tabloids.

When it comes to news media, do you read left-leaning, right-leaning, or centrist sources? Regardless of political slant, all ethical media sources report reliable facts.

• The Wall Street Journal and National Review are examples of right-leaning (conservative), reliable publications.
• The Washington Post and The New York Times are examples of left-leaning (liberal), reliable news media.
• NPR and BBC are considered centrist (topics and viewpoints appeal to both conservative and liberal readers) and reliable.

No matter your preference, read other viewpoints to get balanced information. If you usually read the NYT, for example, check out the same news on the WSJ. What’s different? What’s similar?

Part of self-editing—whether you write fiction or non-fiction—includes fact-checking. Can fictional characters have a skiing vacation in Hawaii? Can they see the northern lights in Hawaii? Look it up. (Hint: yes, yes). Even in fiction, if the “facts” are too much of a stretch or unexplained, you’ll lose readers.

Question “facts” by cross-referencing: does a Google search produce multiple reputable media sources reporting the same information? (Hint: they should). If your life depended on it and you had the means, could you prove or disprove something presented as fact?

Check out this chart and this list for reliability ratings. You might notice that some listings include TV and print, and they’re different.

No matter what you read, you’ll become familiar with a variety of writing styles, vocabulary and, of course, types of mistakes and editing opportunities.

Stay alert for mistakes, confusing statements, or lack of clarity

Some publications tend to have more errors than others. Local newspapers and their online offerings are sometimes loaded with them due to low budgets and sparse staff. But even the big players like CNN (left-leaning, reliable) publish their share, especially when a story is time-sensitive and developing.

Misplaced modifiers are frequent offenders. Missing words or repeated (double) words are also common. Lack of subject-verb agreement sometimes occurs when a noun is changed but the verb is not (it’s often easy to see how that happened).

Spelling, grammar, and punctuation problems, on the other hand, don’t occur as often. Journalists are expert writers, after all, and copyeditors who check their work are highly skilled. Still, stuff slips through.

Why do experienced writers make mistakes?

No matter how good they are, journalists are human just like you and me. Seriously. If I were a reporter on a super-tight deadline, I’d drive copyeditors and proofreaders batty.

True, you rarely see errors in my blog posts, but that’s not because I’m super human. It’s because I have time to revise and check my writing carefully. Even then, something slips through occasionally or I could have done a better job with even more time. But you have to call it quits sooner or later. (But one more read-over 12 hours after posting revealed the error above!)

Here are just a few reasons for journalistic mistakes:

Whether errors make it to print or a website depends on the skills of copyeditors and proofreaders. And as you can imagine, many political and health journalists have been working at breakneck paces lately. How fast and how much anyone writes or edits, especially under high pressure in less than optimal conditions, has a direct correlation to errors.

Most basic spelling, grammar, and punctuation mistakes are easy for the average reader to catch. But glossing over errors just to get the facts is common. Or you might think your lack of knowledge or reading skills is the reason you’re confused when, in fact, it’s the writing that’s the problem.

Obviously, you might not catch certain errors if you’re not familiar with them. But something might look plain old wrong. And you’re probably right.

• Slow down. Pay attention.
• Read for content first. Does the article make sense? Is it logical? Can you keep track of who and what it’s about?
• If you’re confused, re-read. If it’s still confusing, figure out where you’re stumbling and what the problem is. Don’t worry about the exact terminology, but try looking it up with a question on Google. (Try “why are sentences confusing,” for example.)
• Examine elements separately: spelling, grammar, punctuation, sentence structure, and so on.
• Copy/paste the article into an editing app like Grammarly or ProWritingAid.

Keep in mind that journalists follow slightly different rules compared to fiction and other types of writing. The AP Stylebook is a journalist’s bible, whereas fiction writers generally adhere to the Chicago Manual of Style. So, if you’re a novelist and think a comma is missing from items in a series (apples, oranges and pears), it might be fine according to AP Style.

Here’s a good comparison of 5 big differences between AP and CMOS.

How can writing mistakes in the news improve your self-editing abilities?

Finding errors or problems in our own writing is notoriously difficult. But when you practice with someone else’s writing, mistakes are easier to spot, and you’ll be far more eager to hunt them down.

Moreover, training your eyes to evaluate writing rather than simply reading is essential for self-editing. Copyediting and proofreading are not the same as reading, after all. And that’s why it’s best to read for content first (so you’re familiar with the topic) and then analyze. If you don’t, it’s easy to slip into reading mode and skim over errors or make assumptions about meaning even when it’s unclear.

Quite simply, editing news articles or anything else makes you more sensitive to the importance of clear, concise, easy-to-read writing.

Here are some recent bloopers I spotted:

Ossoff rose to political prominence during his unsuccessful bid for a Georgia congressional seat during a 2017 special election that attracted widespread national attention and huge sums amounts of fundraising revenue.

Someone preferred “sums” over “amounts” and forgot to delete “amounts.” Or was it amounts vs. sums? Take your pick.

While in postal facilities, Inspectors review physical security of both the workplace and the mail to quickly identify and address and potential issues with election mail.

Should that “and” be “any” before “potential?” Or maybe a copyeditor saw “address” as a noun paired with “issues” and added the “and.” Who knows? Always re-read a sentence after making a change.

Rep. Paul Gosar objected the the counting of the electoral votes in Arizona.

Any guesses on how the double the-the happened here? I have no clue.

The stakes are hight for both parties – Democrats need to win both seats to force a 50-50 Senate that would see them gain control through President Vice -elect Kamala Harris eventually casting tie-breaking votes.

OY! Someone slept through this one. Despite the horrendous typo, the sentence is technically correct. A bit of a mind-bender, though!

Tip: remove unnecessary words to see the “core” sentence and find mistakes, if any.
Democrats need to win to force a Senate that would see them gain control through Harris eventually casting tie-breaking votes.

His father-in-law was hospitalized and seemed to be getting better. But he turned very ill, very quickly and he stayed a ventilator for six weeks.

So this guy became a ventilator and stayed that way for six weeks? I would add the missing “on” and reword the rest: “He quickly became very ill…” (Since when do people “turn ill?”

Theme: We all breathe the same air. Please share with your author friends!

This was a publisher’s call for submissions on Facebook. And it’s probably not a good idea during a pandemic.

Last but not least!

Flush away 2020 and start the new year fresh. Write what you’re leaving behind on some TP & post a pic for a chance to win $21K!

On Twitter, a toilet paper company advertised a contest. I wasn’t the only one who snagged them on their unfortunate choice of words in the second sentence! Um, no thanks.

Next Post: What stops you from writing? + 10 writing prompts