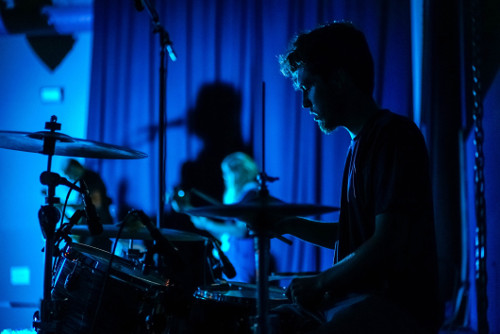 If you use the same kinds of sentences over and over, your writing will be as monotonous as the steady beat of a bass drum with no other percussion or instruments seen or heard.

But if you jazz things up with a snare drum, tom-toms, hi-hats and cymbals and change up the beat for different songs or even parts of songs, you might have something worth listening to.

And the same goes for your writing.

A thunderstorm crashed around her house. The rain pounded the roof. She walked to the kitchen. She answered the phone. Nobody was there. Who could it be? She felt scared. She locked the doors. The lights went out. Loud noises rattled the roof. A strange sound came from outside a window. Her hands shook.

You get the picture; you can understand what’s happening. But could you read an entire article or novel written like that?

Here are five ways to jazz up your sentences. Start with a simple, complete sentence—an independent clause—and play around until you get the rhythm just right in your paragraphs, scenes, chapters, and your entire manuscript.

An independent clause is a complete sentence that can stand alone because it contains a subject and a verb that work together.

You can combine two of them in a couple different ways.

Alexia was scared, but she tip-toed to the dark kitchen anyway.

She had to find her flashlight, so she felt for the familiar shape in the drawers.

You can also jazz up your sentences by joining two independent clauses together with a semi-colon when the meanings are closely related.

The storm sounded like a hurricane; it was fierce, and she hadn’t expected it.

A dependent (or subordinate) clause can’t stand alone (even though it has a subject and a verb that goes with it) because a “dependent marker word” starts it. (If that word were a coordinating conjunction, as in #1, the clause would be independent.)

Dependent marker words (also called subordinating conjunctions) include after, although, as, as if, because, before, even if, even though, if, in order to, since, though, unless, until, whatever, when, whenever, whether, and while.

She could hardly see since it was so dark.

She was searching in the last drawer when something crashed in the dining room.

3. Add an introductory clause to a sentence.

An introductory clause is a dependent clause (as in #2) but it starts the sentence with background or extra information to make what follows make more sense.

You can use an introductory clause with almost any kind of sentence.

Although her entire being became rigid with fear, she remained quiet and listened closely.

Since it was so dark, she couldn’t see a thing, but she could hear something.

4. Use an em dash to communicate a sudden change, excitement, fear, or surprise.

This is a great way to jazz up your sentences. You can read more about em dashes here, but remember what they look like.

A hyphen is an itty-bitty thing usually used to join words, especially compound adjectives, as in “a three-year-old child.”

An en dash is the length of the letter n. It’s generally used by fussy copyeditors (like me) who follow style guides like it’s their religion. Often used to express time as in August–December. (On Windows/Word, use Alt + 0150)

And remember what it isn’t. An em dash is not two hyphens (although Word and other word processing apps can change them to an em dash for you) and it’s not an en dash. If you’re a British writer, though, you probably use an en dash for the same purpose as the em dash American writers use.

She glimpsed something—the sheer white curtains rustling—at the far end of the room.

Note: When you use two dashes to highlight additional information, be sure the beginning part and the end part of the entire sentence form an independent clause. In this case, “She glimpsed something at the far end of the room” is fine. She is the subject, glimpsed is the verb. The phrase in between the em dashes could be almost anything and doesn’t have to fit with the main sentence.

5. Jazz up your sentences with a series of actions.

A serious of actions can create tension. Just be careful to not add too much description along with it—as in adjectives or adverbs—or you’ll have a sentence that’s completely unwieldy. Let your readers use their imagination.

She tiptoed around the table, looked underneath, peered into a closet, and inspected the adjoining living room and hallway, but she still couldn’t figure out what had made the noise.

By the way, that sentence is just two independent clauses joined together with the coordinating conjunction but, as in #1. The difference is that the first independent clause has multiple verbs that go with the subject (She tiptoed, looked, peered, and inspected). It’s just another way to jazz up your sentences.

The thunder rumbled, the rain poured, and lightning lit up the windows as she wondered whether the noise had just been her imagination.

You want to know what happened to Alexia? You were paying attention to the story more than the nouns and verbs in the sentence examples, right?

6. Use a series of super-short sentences and fragments to add tension.

The lights went out again. Darkness. Terror. A strange noise, different this time. Softer. So close. Getting louder. Something on her leg. She screamed, and the lights came on. Her cat bolted out of the room and ran for the open window, but he got hopelessly tangled in the curtains. Alexia burst out laughing.

Were you expecting a murderer? Oh, well. Let’s do that then.

The lights went out again. Darkness. Terror. A strange noise, different this time. Softer. So close. Getting louder. Footsteps. Something at her neck. She screamed, and the lights came on. A man, a knife at her throat. She rammed her knee up and jammed her fingers in his eyes. He reeled back and Alexia grabbed the knife.

“So, Zachary. This is what it’s come to then, is it?” She watched him stagger and fall, one hand clutched over his eyes and the other between his legs. She stepped forward, watching, barely breathing.

When you’ve got that balance of drums rolling out a good beat, check out this list of literary devices to add some glitter to your show.

Note: Example sentences are intentionally simple so you can focus on the sentence structure, not my incredible literary genius or enormous vocabulary (she said with a chuckle).

Photo by Greyson Joralemon on Unsplash

What’s your trick to jazz up your sentences and create rhythm? Share in the comments!