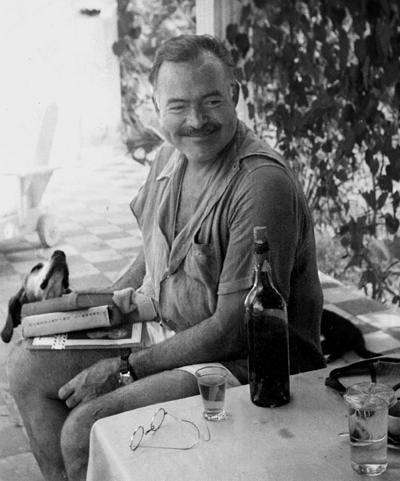 The most essential gift for a good writer is a built-in, shockproof bullshit detector. —Ernest Hemingway

A guest post by Charles Lawrence for Simple Writing.

Regardless of the industry you’re trying to break into, you face two problems:

How do you get a job without experience?

How do you get experience if you can’t find a job?

It’s even harder when you’re trying to break into the fiercely competitive world of freelance writing. And now that the Internet has created a global marketplace, freelance writers compete with people all over the world with varying skills and wildly disparate pay rates.

I started freelancing when I was balding, wearing glasses, and suffering from middle-age spread.

I had no real writing experience.

I never kept a journal.

I never wrote for fun.

I never worked on my high school newspaper or yearbook.

I did spend most of my teenage years and adult life reading anything I could get my hands on—books, newspapers, magazine articles, billboards, cereal boxes, album covers, and Raid® Flying Insect Killer bottles.

I read anything and everything just because I love to read.

How I got from there to here

I’m originally from the Midwest US, but in my late 20s and early 30s I lived and worked in New York City.

To get to work, I took the F train from Brooklyn to Midtown Manhattan. The commute was an hour, door to door—one way. But the time wasn’t wasted. I read two newspapers every day without fail: The New York Times and the Daily News.

I later moved to Staten Island and my commute became even longer—an hour and a half one way. Now I could read three newspapers: The New York Times, The Daily News, and Newsday.

I didn’t know it at the time, but the years I spent reading newspapers during my long NYC commute was my training in writing and journalism.

Becoming the big fish in a little pond

At one point, too much time had passed to audition for the E-Street Band, but writing—well, why not?

Citrus County, Florida has a small daily newspaper: The Citrus County Chronicle. It has a very small staff and relies mostly on freelancers to report on the daily happenings in this mostly retiree area.

I thought if there was an opportunity to get published, this small newspaper was probably it. So I contacted the Chronicle’s editor by phone and pitched an article.

Cold calling an editor on the phone is so 20th century, I know. But it’s a pitching technique that can, in fact, be successful, especially in small cities, towns, and rural communities.

The editor bought the idea and told me to write the article and submit it. She said she could run it as a guest column, but there would be no pay.

I wrote the article that night, submitted it the next day, and followed up with her a day after that.

As it turned out, the editor liked the article and made no changes to it.

The editor ran my article, as is.

I got the Chronicle when it came out, cut out my guest column, and ran off copies for my parents.

I went back to work and had all kinds of thoughts swimming in my head.

As you can probably tell, I was full of doubt, worry, and fear.

I started thinking my guest column was like going to baseball fantasy camp, where you get to wear a uniform and hit baseballs off Roger Clemens for a day.

Maybe that’s what I really needed after all, I thought. To know I was good enough to be published, even if it was just this little rural newspaper.

And maybe, if I’d made other decisions in my life, maybe I would’ve been a great professional writer by this time.

Maybe if I’d taken a risk when I was younger, instead of doing what everyone else does . . .

Go to school. Get a job. Take home a steady paycheck. Take advantage of the benefits.

But it’s not much fun.

Seriously, what do I have to lose by just trying to get published again?

It took me almost a year to contact the Citrus County Chronicle again to pitch another article.

By this time, the previous editor I’d worked with had left.

I told the new editor I’d written a guest column for the newspaper a year earlier, and I wanted to know if he’d be interested in having me write another article.

I sent him my one and only guest column for review.

He said he’d get back to me.

When we reconnected, the editor asked me to pitch some articles, and he’d consider having me write them.

I pitched an article. He said he was interested. I wrote it. He published it.

And I got PAID!

I pitched another couple of articles. He accepted them.

And I got PAID again!

I must have done a good job because the editor started giving me assignments to cover human interest stories for the Citrus County Chronicle. Eventually, I had a byline and wrote a few articles a month for the newspaper.

I saved my clips and, after a year with the Chronicle, I approached the next biggest newspaper in the area, the Ocala Star Banner.

This time I emailed the editor and provided links to my clips. I pitched a couple of articles. He accepted them.

And I got PAID.

And then, this editor started giving me assignments, too. And I was given the title Correspondent.

I felt like Walter Cronkite, but I didn’t let it go to my head.

Except when my live-in girlfriend asked me to help around the house. Then I pulled the old Don’t you know who I am? routine. But it didn’t work. She’s not a writer, so she’s no Hemingway, but she did have her own built-in bullshit detector.

The moral of the story and lessons learned

The fact is you’re writing. You’re pursuing your dream. You’re following the road not taken.

And your friends and family and neighbors?

And when you show your friends and family what you’ve accomplished . . .

Whether they say it or not, they’re going to think it’s awesome that you’re a published writer.

Because frankly, it will always be much cooler to be a paid, published writer than being a life insurance salesperson ever will be.

Your turn! How did you get your start as a freelance writer? Or what do you worry about when you think of getting started? Comments are open. And please share!

About the author: Charles Lawrence is a Florida-based freelance writer who has been published locally and nationally in newspapers and magazines. When he’s not reading or writing, he spends time with his friends and family while his dog Toots leads him around by the nose. Learn more at Charles Lawrence Writer.