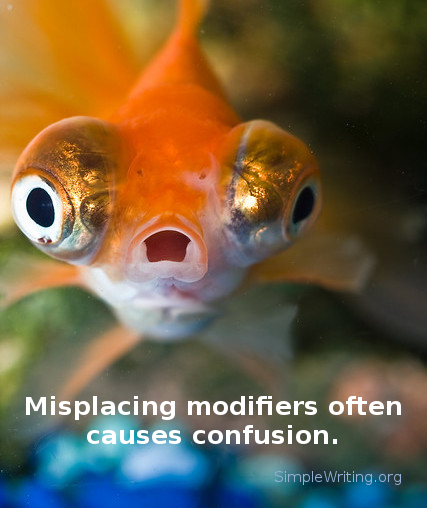 You’ve probably heard of misplaced modifiers. But do you know what they are?

A lot of writers have trouble understanding them because they’re confusing and difficult to spot. But if you take time to understand them—and avoid them in your writing—you’ll be less likely to confuse your readers.

What is a modifier?

A modifier is a word or group of words (a phrase or clause) that describes or alters the meaning of other words in a sentence.

What are misplaced modifiers?

Misplaced modifiers are modifiers that aren’t in a position to create the desired result. In fact, the placement changes the intended meaning without the writer realizing it. Sometimes the change is minor, and readers might be puzzled for only a moment before they figure out what’s meant. Other times, the result is hilariously funny, disastrously misleading, or flat-out wrong.

Misplaced modifiers are often too far from the word or words they’re supposed to describe. Sometimes the word meant to be modified is missing. Other times the modifier can’t do the job because it’s positioned awkwardly.

Misplaced modifiers cause reader confusion and even a misrepresentation of facts.

In recent news, I found variations of the following statement. Can you spot the misplaced modifier?

Robert F. Smith announced that he’d be giving 396 college seniors the gift of a lifetime during his commencement speech at Morehouse College. CNN.com

It seems like a report of two events. At a certain time and place, Robert F. Smith announced (past tense) that he would do something during a future event: “He’d be giving 396 college seniors the gift of a lifetime during his commencement speech at Morehouse College.”

That’s not what was meant, however. Here, the same news item (likely from a news service such as AP) has been edited differently, and the modifier has been placed at the beginning of the sentence. The statement now communicates the intended meaning.

During his commencement speech at Morehouse College, the billionaire investor Robert F. Smith pledged that he and his family would pay off the student debt for the entire graduating class. The New York Times

The modifier, which in the CNN.com version is misplaced, is during his commencement speech at Morehouse College. Tricky bugger, right?

These are just a few of the most common types of misplaced modifiers.

An adjective is a word that describes (modifies) nouns and pronouns. But you know that, right? In the following sentence, “silver” is the adjective in question.

As he tidied his desk, Horace discovered a silver woman’s bracelet.

This looks like Horace found a bracelet that belongs to a silver woman. That’s because an adjective is normally placed next to the word it’s modifying, and here it’s placed next to “woman” instead of “bracelet.”

To correct the problem, place the adjective next to the word it’s intended to modify.

As he tidied his desk, Horace discovered a woman’s silver bracelet.

I ate a hot bowl of oatmeal for breakfast.

That’s not likely to create much confusion. Technically, though, hot should modify oatmeal, not bowl.

I ate a bowl of hot oatmeal for breakfast.

You could argue that a “bowl of oatmeal” is similar to a bowl of soup or a bowl of cereal. They’re common three-word concepts, after all—prepositional phrases—and one adjective can modify the phrase.

But what about this one?

I ate a cold bowl of sliced fruit for breakfast.

A reader will focus on the cold bowl instead of the sliced fruit. She ate a cold bowl? Seriously? Or why is the bowl cold? Was it in the freezer to get frosted for a decorative look? Is the fruit warm?

I ate a bowl of cold, sliced fruit for breakfast.

Now the focus is on the fruit, and it’s clear that it’s cold (and much more appetizing). And even if “bowl of oatmeal” can be seen as a single concept, similar phrases are not. So it’s best to stick with good writing habits for consistency.

An adjective clause is a group of words that

Soggy with mayonnaise, Timothy wolfed down his sandwich and charged out the door.

Here we have a guy named Timothy who somehow absorbed so much mayonnaise he was soggy. You can tell what the writer means, of course, but it’s easy to stumble over this sentence and get confused. It’s better to create an adjective clause so it’s clear that the “sandwich” is soggy, not poor Timothy.

Timothy wolfed down his sandwich, which was soggy with mayonnaise, and charged out the door.

By the way, it’s fine to start a sentence with “soggy with mayonnaise” if the phrase clearly modifies sandwich.

Soggy with mayonnaise, the sandwich slid down Timothy’s throat as he charged out the door.

But now the subject of the sentence changes. Do you want the emphasis on Timothy or the sandwich? Hint: Unless you’re writing The Amazing Adventures of Sam the Sandwich, pick Timothy.

Squinting modifiers are also called ambiguous or two-way modifiers. They’re single words—often adverbs—that can modify the word before or after them.

Here’s the trouble: When you have a headache, do you need to drink water often for relief? Or is drinking-water or (the act of) drinking water a headache remedy that often relieves, though not always?

Correcting a squinting modifier means rewording and making sure the sentence communicates exactly what you mean.

I frequently feel rewarded when I write.

When I think of a dangling modifier, I picture a sentence with a couple of words hanging like a lure at the end of a fishing pole. It’s confusing, at least for me. It’s not an intuitive sort of term, and I’d rather call it an isolated or lonely modifier.

But a dangling modifier really does sort of dangle. It’s a word or phrase that’s supposed to modify (describe) something in a sentence, but the thing-to-be-modified is missing or unclear. So the modifier is lost, useless, causing confusion, flailing about… dangling, as it were.

A “dangling participle” is a type of dangling modifier.

Without getting into all the (many) details, a participle is a verb form in the present or past tense that can be used as an adjective (modifier) and typically ends in -ing or -ed. A participial phrase starts with a participle, contains at least two words, and always functions as an adjective. Here’s good information on participles.

Let’s take a look at a dangling modifier, which in this case is a participial phrase.

Having read the book, it’s sure to be a great movie.

Check out this correction.

Having read the book, I’m sure it will be a great movie.

Now we have “I” right after the modifier “having read the book.” Do you see the difference? “I” is the person who has read the book. You could also correct it like this.

I know it will be a great movie since I read the book.

You can’t be more clear than that. Here are a few more examples.

Whipped well, he scrambled the eggs for his wife in butter.

That’s the type of dangling modifier that’s sure to get some laughs. Better:

He scrambled the well-whipped eggs in butter for his wife.

Jumping rapidly from branch to branch, the photographer watched the squirrels.

The photographer watched the squirrels as they jumped rapidly from branch to branch.

The little girl ran away from her sister, still holding the ball tightly.

Who is holding the ball? The little girl? Or her sister?

Still holding the ball tightly, the little girl ran away from her sister.

The little girl ran away from her sister, who was still holding the ball tightly.

And that’s a wrap! Make a point to notice misplaced modifiers when you’re reading. And as you become more aware of them, you’ll recognize them easily in your own writing and avoid confusing your readers.

Previous Post: What Causes Writer’s Block and How to Beat It