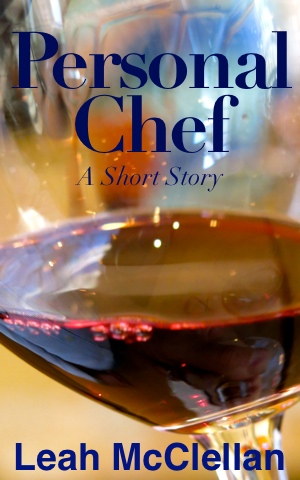 Many of you know I’m working on a novel, so you might be surprised that I just finished a short story and published it on Amazon and other online outlets via Smashwords.

But I’ll bet some of you might be wondering why I’d break concentration on a novel and write a short story. Isn’t the novel going well?

Truth: The novel is humming along, but the story was screaming to be written. And I heeded the call.

Besides, short stories are fun. You can create an entirely new world peopled with interesting characters in far less time than it takes to write a novel.

The main idea behind “Personal Chef” had been lurking in my head for awhile: a character who (like me) hates to cook—or take time for it—and wishes she could just take a pill three times a day for all nutritional requirements. Wouldn’t life be easy!

Then I thought, Gee, wouldn’t it be nice to have a housekeeper do all the work? Cue Alice from The Brady Bunch.

It stayed in my head like that for months, but it just got louder and louder. And then, in a local grocery store, gazing over all the vegetables and fruit and wondering what to make for dinner, a clerk asked me whether I needed something in particular.

And I barely heard what he said because I suddenly knew I had the story. Sometimes all you need is a tiny spark to get something going.

A short story can be easier to write than a novel, but that’s not always true.

In a novel, you have room to spread out and get into all the gory details.  That can be a good thing, but it can also mean a lot of complications.

In a short story, everything’s condensed. It’s a lot like a novel as far as plot, theme, arc, conflict, and so on. But action, descriptions, and dialogue that could easily take a few chapters has to be condensed to a few paragraphs or skipped entirely. And that’s not necessarily easy.

I did, in fact, slash almost 2000 words from “Personal Chef” during editing. I could probably slash a few hundred more, but it gets tricky.

Ship it! I finally said. Stop being a perfectionist. And so far, feedback has been great.

Here are 5 great reasons to write a short story in the middle of writing a novel or any time.

1. Flesh out your novel’s main theme.

The theme in “Personal Chef” is somewhat similar to that of my novel—both feature a strong female main character in her mid or late 30s who meets a man younger than she is. It’s a social stereotype thing I’ve wondered about for years, ever since I heard that Céline Dion’s husband was 26 years older than she is. That’s generally accepted when the man is older, though it might raise a few eyebrows. When it’s a woman? Not so much.

But there the similarity ends. And although I’m not working with such drastic age differences, my male characters are younger, and it’s not something I’ve personally experienced beyond a few months or a couple of years. So it’s worth exploring and researching a bit.

2. Work within the same genre.

In my case, despite the differences and the lengths, both the short story and novel are contemporary romances. And I wanted to experiment in that genre but with something much shorter.

But romance, well, been there and done that in real life, of course. So it’s natural for me to write about it. In the novel, some elements of action or adventure and danger are included, but in the short story, not so much.

And if you’re writing a sex scene(s) in your novel, it’s a good idea to get some practice. You don’t want to win the Bad Sex in Fiction Award, do you?

3. Write something fresh when your brain is aching from the complexities of the novel.

Pulling all the elements together for an 80-90,000 word novel is no easy task. And for me, it does seem like it’s dragging sometimes, though it’s only six months since I started it.

A short story has to be—obviously—shorter than a novel and relatively simple as far as structure goes. There’s no room in 3,000-7,500 words, say, for meandering sub-plots or more than one or two main characters. Even in a longer short story—which can run up to 30,000 words depending on the authority you consult—your space is limited. So it stays fairly simple by necessity. No guarantees on that though! They’re not always so simple though they might look it.

I’ve had the idea for “Personal Chef” for a long time, and it just started bugging me so much I couldn’t ignore it. And when I had the spark of inspiration in the grocery store as I mentioned above, I just had to write it.

If your Muse tells you to sit down and write something, or if you can see the story like it’s happening, write it, no matter what else is going on. And do something with it. Self-publish it, submit it to a contest, or send it with a query letter to a publisher that specializes in or welcomes short stories.

5. Enjoy the satisfaction of finishing something.

It definitely feels good to get something worthwhile finished while slogging through a long novel. I’ve written other short stories, but this one just called out to me. It’s like taking a break without being unproductive. And now I’ll go back to the novel with fresh eyes and new energy.

But I might turn this short story into a series. What happens next? Stay tuned.

UPDATE: This short story became a novel which you can read about here: Writing a Novel During NaNoWriMo.